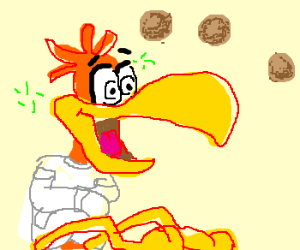 Hey! Let’s have our country governed by babbling idiots! Like this:

Ketanji Jackson, SloJo’s Supreme Court nominee, was asked by Senator Marsha Blackburn the other day, “Can you provide a definition for the word ‘woman’?” And here’s the rest of it (https://www.dennyburk.com/do-you-know-what-a-woman-is-ketanji-brown-jackson-doesnt/).

KJ: “Can I provide a definition? No.”

Can you believe this? They’re gonna put this nincompoop on the Supreme Court. Could we at least have somebody who knows what a woman is?

Think back a little ways to the Harry Reid Era in the Senate. What did Democrats do whenever President Bush tried to appoint a judge? [Cue Jeopardy theme] Uh… Like, they just said No! They blocked a passel of George Bush judges. Stopped ’em cold–and mostly never even tried to plead their reason for rejecting them was anything but naked politics.

Is this some kind of rocket science that eludes a Republican’s understanding? Just say No! Every time SloJo tries to appoint a high court judge, just say No.

Even a Republican ought to be able to manage that.

10 comments on “She Doesn’t Know What a Woman Is”