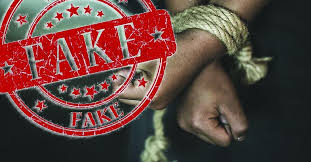 When they’re not busy spying on parents and trying to prove that anybody who doesn’t like their local school board’s policies is a domestic terrorist, the FBI occasionally finds a few minutes to devote to protecting us from real criminals.

The FBI has just released a warning against a new crime, “virtual kidnapping” (https://www.fbi.gov/contact-us/field-offices/chicago/news/press-releases/fbi-chicago-warns-public-about-virtual-kidnapping-scams). It’s when the scammers pretend they’ve grabbed one of your loved ones and you’d better pay up quick, or else.

This works best when someone in the family travels internationally and may not be easy to contact. The bad guys search the social media for anyone naive enough to say “I’m flying to Kazakhstan! See you in six weeks!” That’s the person they pretend to kidnap. Then they phone his or her loved ones and shake ’em down. Some of them, says the FBI, can put on a rather convincing show. Then they try to get you to pay through a wire transfer or gift cards. No one has actually been kidnapped, but you don’t know that.

One way to beat the scammers is to ask them what their prisoner looks like, because usually they don’t know. Or you can demand some personal information: “If that’s really Grandma, ask her to tell you my birthday!” It’s also become a bad idea for anyone to announce on the social media that he’s going on a long trip far away: so don’t announce it, the whole world doesn’t need to know.