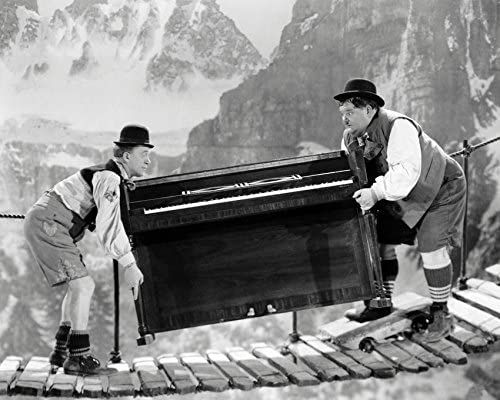 When my folks acquired Aunt Florence’s piano, my father hired me and two of my friends to help him collect it. We were high school kids! We could do anything! Gary was on the wrestling team, Ronnie was in vo-tech learning to be a plumber, and I was in judo–I played many matches against grown men and did just fine. But there’s a big, big difference between a successful foot sweep and moving a piano.

It was like it was nailed to the floor. We couldn’t budge it, couldn’t left it an inch. Then Uncle Jimmy came home, and he and my father picked up the piano like it was an empty cardboard box, carried it out of the house, and loaded it into the U-Haul in a matter of minutes.

What a humbling experience that was! These men weren’t Olympic weight lifters. Just two ordinary, healthy, grown-up men. Either one of them was stronger than the three of us. Oh, the embarrassment. As you can see, I’ve never forgotten it.

I think we learned a lesson.