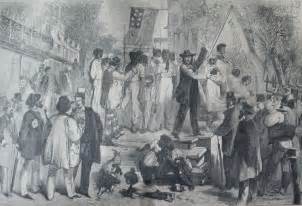 The last thing in the world desired by American liberals is racial harmony. It would put most of them out of work. So they do everything they can to keep the pot boiling.

HBO plans to come out with a new mini-series, Confederate, based on the premise that the South won the Civil War and still has slavery in the 21st century. A lot of people think this is simply more race-baiting; but the folks at HBO say, “Trust us, it’ll be real nice” (https://apnews.com/0e7beba6eea1404490720923932fb7e9/NoConfederate-campaign-against-HBO-slave-drama-takes-off). They do not offer us any reason why we should trust them.

Alternative history based on ignorance, for whipping up anger for political purposes–that’s what this is. In the exceedingly unlikely event that the Confederate states could have won their independence, and then kept it for another 150+ years, it’s even more unlikely they would have hung on to slavery. It would have been economic suicide, and would have deprived the new nation, outnumbered by its enemies, of millions of African-Americans who would have made good citizens, with much to contribute to their country. Besides which, even in 1865, there were many prominent Confederate leaders saying the time had come to abolish slavery: Robert E. Lee and Jefferson Davis, just to name two.

But here the name of the game is to keep the racial grievance industry, dba the Democrat Party, in business. And that’s their only game.