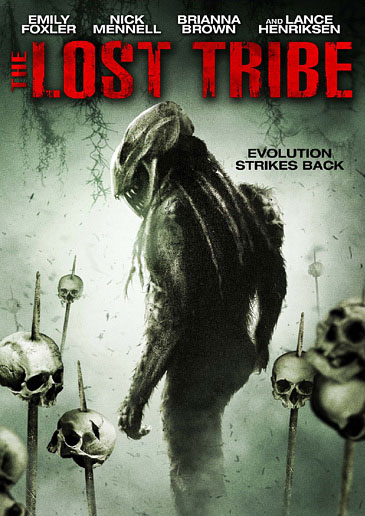 “Evolution strikes back”–is that what happened here? I don’t know what we ever did to Evolution to deserve this movie.

I don’t ask a lot from a Saturday afternoon movie. All I want is to relax my brain. I mean, I’ll put up with actors in gorilla suits, special effects that wouldn’t mystify a toddler, and a storyline featuring characters who get killed off one by one because they don’t have the sense God gave an umbrella stand.

This past weekend we blundered into a movie that has all of the above: The Lost Tribe, made just a few years ago and starring nobody. The screenplay was a jumble of The Predator and a lot of Friday the 13th movies, with a dash of The DaVinci Code thrown in to make it really intolerable.

Let me set it up for you. There’s an archeological dig on an uninhabited island somewhere; and they find a fossil that turns out to be–you guessed it–The Missing Link. Says a scantily-clad girl scientists, “Uh-oh! Why, this proves that God did not create man! Wow, if the Church ever finds out about this, we’re dead!” But of course the Vatican already has an inside man on every little scientific expedition, just in case; and of course the Church sends in a team of sadistic hit men to murder all the scientists… and then a bunch of yuppies is shipwrecked on the island, and the Missing Links go after them…

Time out! Darwinists, is this the best that you can do? Or is this just Hollywood numbskulls taking yet another mindless, gratuitous slap at Christianity because they can? Maybe they think homosexuals or the government can give us eternal life, so who needs God? But trying to decipher the inner workings of reprobate minds is hardly a rewarding pastime.

The story is buttressed by a massive pile of inanities. Like, hey, something really nasty is stalking us, so let’s go wandering around the jungle all alone. Let’s not use our life raft to get off this lousy island. And after the monsters kill off everybody but the last surviving woman, who has already taken a worse beating than any Timex wristwatch, she… well, she just loses her cool and yells at the monsters, and they all run away: this after they’ve wiped out a whole Vatican death squad armed with automatic weapons.

It’s worth your while to avoid The Lost Tribe at all costs.

And if you want to thank me for this timely warning, just buy a whole bunch of my books.

13 comments on “Another Movie For You to Avoid”