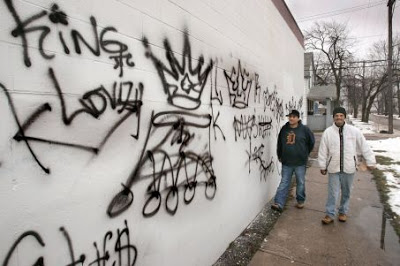 [Nope, nobody acting white in this neighborhood… a White Privilege-free zone]

What would you think of an education theory that says “it is preferable for all the students to be of the same racial group”?

But this recommendation comes not from a segregated Southern school district in the 1950s, but from the ultra-liberal Pacific Education Group in San Francisco, today–a group that has raked in almost $4 million from over 40 public school districts to train teachers and administrators to be “sensitive to White Privilege” ( http://libertynews.com/2015/05/exposed-school-districts-spending-millions-to-train-employees-on-white-privilege/ ).

In a nutshell, these white liberals teach that black kids simply can’t do or learn to do certain things that are inaccessibly part of White Privilege–really arcane stuff like working toward a goal, being on time for school or work, making plans for the future–all that stuff that only evil White people can do and minorities can’t.

Even Juan Williams, not known for taking a conservative slant on anything, remarked that the PEG’s White Privilege training program is based on “negative stereotypes of black capacity to achieve in any situation.”

Really, all that’s necessary for any black American to do is to vote for Democrats. Anything beyond that is just acting White.

It is hardly necessary to refute this inane and wicked stereotype. White liberals insist on seeing themselves as the all-beneficent baby-sitter for a poor, helpless Black America that will never grow up, never be able to take care of itself.

This is the ideology that has led to a 70% out-of-wedlock birth rate among black Americans–to fatherless families, joblessness: to all those problems that liberals cause and exacerbate while professing a passion to solve them.

White or black, it doesn’t matter–get your children out of public school! Before it’s too late.