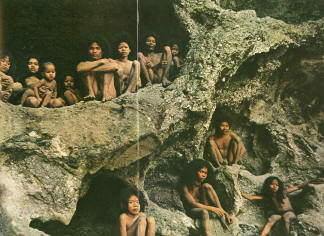 Dear Worldly Wisdom–Here we are in our cave, exactly where you expect to find us. Not only do we not have words for “war” or “conflict in our primitive, unspoiled Stone Age language. We also have no word for “sucker.” (signed) Your friends, The Gentle Tasaday

In 1971, Science and the nooze media went into ecstasy over the discovery, in the Philippines, of a “Stone Age” tribe that had apparently been totally isolated from the rest of humanity for over a thousand years ( http://hoaxes.org/archive/permalink/the_stone-age_tasaday ).

I remember that, I saw the documentaries: “the gentle Tasaday,” who didn’t have words in their language for war or fighting or conflict, totally unspoiled, front-page news for National Geographic and PBS–proof positive that Rousseau was right about The Noble Savage. Yep, that Fall of Man stuff is for the birds, Christians just invented it to be mean. In reality, man is basically good and pure and noble, and it’s only that stinkin’ Western civilization that corrupts him and turns him into a villain.

Ah, the settled science of those days!

And then in 1986 the Tasaday were denounced as a hoax–just a bunch of Mindanao villagers posing as a Stone Age tribe.

Well, really: from the Tasaday caves to the nearest modern village was only a couple of miles. How isolated could they have been?

Filipino politics is an intimate part of this story, so the controversy goes on to this day. It’s possible the Tasaday had been living in that sector of the jungle for a century or more, having fled their original home. But it is not possible that they’d been there for a thousand years and turned into hippies who wore leaves instead of tie-dyed T-shirts.

The Tasaday population today is reported at 200 or so. It doesn’t seem the gene pool would be large enough to carry them through a thousand years.

You know something? Whenever Science and the nooze media get together on a story, it’s just about gotta be humbug.

6 comments on “The ‘Stone Age Tribe’ That Wasn’t”