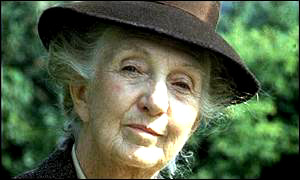 We just watched Joan Hickson as Miss Marple in The Mirror Cracked, and once again I’m in awe of Agatha Christie’s creative genius. Nor does it hurt that these English productions starring Hickson are as faithful to Christie’s plots as humanly possible, and that Christie herself chose Ms. Hickson to play Miss Marple–quite a few years before Hickson was old enough to do it. She is absolutely perfect in the role: Miss Marple to the life.

But think of it. You don’t want it to be just another detective story, seen one, seen ’em all. But you don’t want it to be outlandish, either–nothing like a seven-foot-tall sleuth from Manchuria solving crimes by dipping strips of specially treated bacon into the suspects’ drinking glasses.

So you come up with a detective who is physically incapable of violence, physically unable to run away if she’s in danger, and outwardly the most harmless of all creatures–a little old lady who’s lived in a country village all her life, but has, in the words of one police superintendent, “a mind like a meat cleaver.”

How did Christie ever think of this? There’s never been a more believable detective than Miss Marple in all of crime fiction: this sweet little Christian lady who does her devotionals every morning before she gets out of bed, and yet has such a penetrating insight into the sinful human heart. It sounds unbelievable when I write it down like that; but she’s perfectly believable when you read the novels, or watch Joan Hickson bring her to life.

8 comments on “In Praise of Miss Marple”