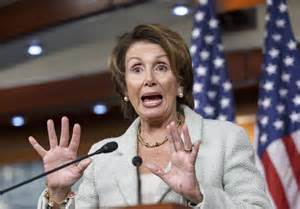 Okay, it’s a stupid question. None of God’s Ten Commandments comes with an “except” clause. Case in point:

Yesterday we received one of those chain emails, this one regarding Nancy Pelosi (D-Transylvania) and a plan to levy a “windfall tax” on retirement income. Pelosi here is quoted as saying the money is to be given to illegal aliens, and “We need to work toward the goal of equalizing income…”

I found this very easy to believe, and it got my dander up. But before I wrote about it, I checked to make sure it was true.

It does not appear to be true. There is no evidence that it was anything  but a hoax.

Yes, the kazillionaires in the Democrat Party, like Pelosi and Kerry and the rest of ’em, are always gasbagging about the horror of “Income Inequality” and how you and I have to have our underpants taxed off so there’s more money for the Dems to redistribute to their assorted voting blocs. Of course, if any of them wanted to ameliorate poverty, he or she could easily walk up to some poor person’s door–if he even has a door–and hand him a big, fat check. Some of these private jet liberals could do this every day and never miss the money. But they don’t like to part with their own money. They like to part with your money.

So I believed the email, but it turned out to be not true. I believed it based on innumerable things these people have said and written–but in this case, Pelosi didn’t say it.

Besides, there’s any number of damaging things we can say about her that are true, without having to bear false witness against her.

Lesson: Beware those chain emails. They might not be true.

4 comments on “Is It Ever Right to Bear False Witness?”