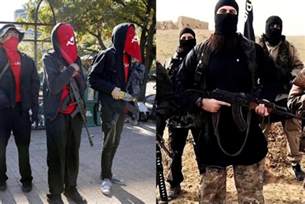 President Trump was a totally bad guy, and probably insane, too, for saying this a few weeks ago; but suddenly even some Democrats have begun to recognize that the Antifa crowd is not such a good thing for America. A few Democrats, including the mayor of Berkeley, have likened Antifa to a criminal street gang (http://www.latimes.com/local/lanow/la-me-ln-antifa-gang-20170904-story.html).

And so the California State Legislature’s gonna do something about it, hum baby! They’re preparing legislation to have Antifa’s “enemies” declared terrorist gangs. You know–all those (ahem) “neo-Nazis.” Of course, if you listen to those wackos in Antifa, every American who voted for Donald Trump, tens of millions of us, is a “fascist” and must be suppressed “by any means necessary,” including gang violence on the streets. That’s what they say–and it’s always wise to believe bad people when they say they’re going to do bad things.

Antifa’s “enemies” might get classified as terrorist gangs, and made subject to higher levels of prosecution and punishment than otherwise; but the jidrools in the legislature are “debating” whether to do the same to Antifa. See, when they get themselves up in masks and hoods, and pick up clubs and chains and bottles of piss, and charge out on the street to torch buildings and cars and beat senseless anyone who might be in their way–well, that’s not really gang violence! It’s just “political expression,” a form of “free speech,” and it would be wrong to treat Antifa like a gang of common thugs because then the legislature would be “punishing a political viewpoint.”

Is that enough hypocrisy for one day? Yeah, I think so. We remain open for hymns, prayers, cat videos, nature, nostalgia, and humor–but no more nooze today. I can’t stand any more, and why should you have to?

3 comments on “Today’s Idiocy Report: California to Rein in Antifa–Not”