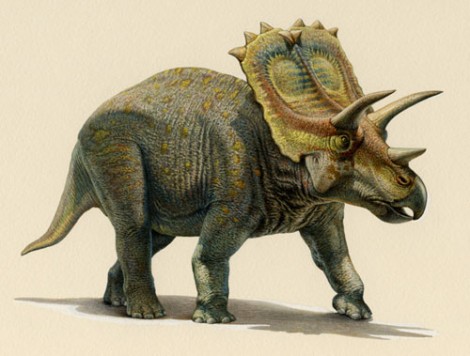 Did dinosaurs die out 65 million years ago, or only thousands of years ago?

I’ve been reading up on this today, because I came across a startling claim that Carbon-14 has been found in dinosaur fossils and can be used to date them. C-14, an isotope of carbon, has long been useful and reliable for dating archeological finds. The thing that makes it useful is that C-14 decays into nitrogen at a consistent, predictable rate. The thing that makes it less useful is that after 100,000 years ago or so, tops, there’s no C-14 left to measure.

A site called “newgeology” has a long article about C-14 dating of dinosaur fossils, an article which makes some eye-popping claims (http://newgeology.us/presentation48.html). Let me very briefly discuss three highlights.

One: Creation scientists who found C-14 in eight dinosaur fossils presented a paper to a conference of the Asia Oceania Geosciences Society. This is the right protocol to follow. The paper was at first accepted, but then abruptly deleted from the program without a word to the authors. Because, said the chairman, “There is obviously an error in these data.” An error not even worth discussing.

Two: Creation scientists submitted samples of dinosaur fossils to the Center for Applied Isotope Studies, without revealing what the samples were. After allowing for the usual variations, the lab found the samples to be about 30,000 years old.

But when someone informed them that the items they’d tested and dated were dinosaur specimens, the lab president hit the ceiling. “The scientists at CAIS and I are dismayed by the claims that you and your team have made with respect to the age of the earth and the validity of biological evolution. Consequently, we are no longer able to provide radiocarbon services in support of your anti-science agenda.” Which does not address the issue of whether their testing procedures are all they’re cracked up to be.

Three: A part-time employee studying C-14 in dinosaur fossils at the Biology Dept. at Cal State U. Northlands was swiftly sacked after the department head found out what he was doing. “We are not going to tolerate your religion in this department!” raged the objective scientist. No emotional commitment to atheism here. That was in 2013. In 2016 the–ahem–university paid $400,000 to settle the employee’s wrongful termination lawsuit.

Can I vouch for my source, “newgeology”? No, not really. It’s a creation science website. That does not mean its writers are incapable of any kind of prevarication; nor does it mean that their claims here aren’t true.

I want to believe my fellow Christians, but the Old Earth/Evolution paradigm was so deeply instilled in me, for so long, that it’s hard to break away. And who am I to say that my interpretation of Genesis Chapter 1 is the one and only right interpretation? I’d be laughed out of the room.

At the same time, I confess to a deep distrust of Establishment Science. The Global Warming/Climbit Change Scam has abundantly demonstrated a profound lack of integrity among scientists as a subculture. Anything for politics! Anything for power! High priests of a New World Order! (And those who know me well, will understand that I have to be pretty riled up to use that turn of phrase.) Plus the fact that this subculture is riddled with atheists of the most rabid variety.

The supremely funny thing about it all is that it really doesn’t matter when the dinosaurs died out. And yet this question has been turned into an emotional battleground, with other things at stake that do matter, that matter very much: like whose word has authority, God’s or man’s? Is science divorced from God still science, or just a kind of idol worship? And so on.

I can’t prove that anybody’s telling the truth, and that does trouble me.

17 comments on “The Age of Dinosaurs: Who’s Telling the Truth?”