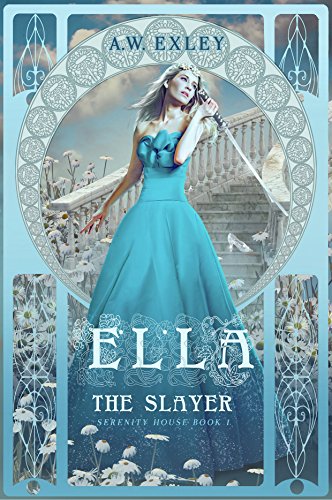 Here she is with her katana. I wonder what school she studied in.

In my continual search for fantasy fiction that edifies instead of just making you dumber, I receive many invitations to review new books. Like Ella the Slayer, billed as “an Edwardian retelling of Cinderella.” Or “Cinderella” meets “Upstairs, Downstairs.”

The premise is, the worldwide 1918 flu epidemic was something more sinister than a germ, and the people who die of the flu come back as zombies who have to be killed all over again, blah-blah. I hate zombies. You seen one zombie, you seen ’em all. Besides which, the Great Flu was only 100 years ago and there are those of us whose families included some of those victims: this is in rather bad taste. In fact, it’s in execrable taste. The publisher ought to get the ducking stool, and the writer a public thrashing.

But allow me to mount my hobby horse–

Ella, the heroine, is described as “a katana-wielding scullery maid.” A lot of those in Edwardian England, were were?

I studied Japanese swordsmanship. I had to study and practice with the wooden sword for five years before I was allowed even to touch a katana–ten pounds of live steel sharpened to a razor edge. This is a serious weapon and I don’t appreciate ignorant wannabes fannying around with it. You could very easily do yourself a major mischief.

No one can say that my own fantasy novels fail to include major female characters who are strong, brave, resourceful, and worthy of admiration. Believe it or not, this effect can be achieved without writing up your female characters as comic-book superheroes with steel bras. I think I hate superheroes even more than zombies. Like, how many cliches can you jam into each chapter?

Why is non-idiotic fantasy so hard to come by?

2 comments on “No, No, Please, No! No ‘Katana-Wielding Scullery Maid’!”