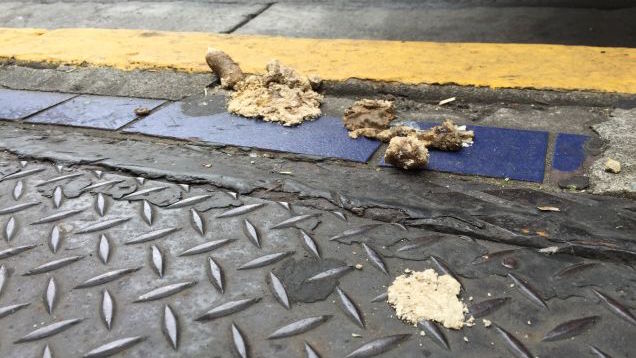 I know it’s a gross picture, but this is what our society is subjected to.

What will posterity think of us? If there is a posterity, that is.

“The 21st century? Oh, yeah–transgender stuff. Those people who liked to throw feces all over the place. Musta been a bad time.”

San Francisco is already famous for piles of human ca-ca littering the sidewalks. But the culture always goes coast to coast, so now we have an incident in St. Petersburg, Florida: a convicted felon strolled into the 7-11 the other day with a bucket of **** which he strewed about the store until he was arrested (http://thesmokinggun.com/documents/revolting/vile-slurry-arrest-710532).

There have also been a couple of intensely disturbed joggers, here and there, who set themselves up as phantom poopers.

It’s getting rather messy out there.

Certain kinds of monkeys throw feces at humans who trespass on their territory; but why are humans doing it? Is it mere unfocused rage? A wave of mental illness, exacerbated by the fact that we’ve closed down so many of the mental hospitals, and these people can’t get treatment?

Maybe it’s just plain culture rot. Like, among most if not all societies, throwing crap around is a serious taboo. It seems this taboo, like so very many others, is breaking down.

Think about it–if you can.