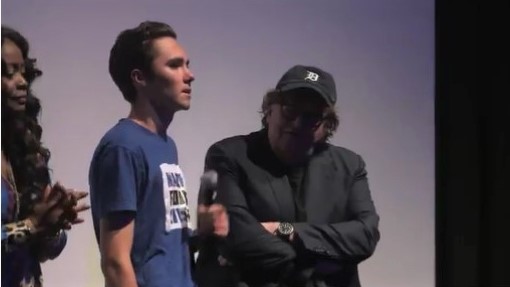 Sure you want to turn America over to this pair? Really sure?

These are the people who want to rule your country.

David Hogg, the ignorant little publicity-chewing monster created by the Democrats, had occasion last week to give a speech in Canada, sharing a platform with Michael Moore, yet another socialist wacko prominent in the Democrat Party.

Perhaps young master Hogg simply forgot where he was, he’s giving so many speeches lately; or maybe he forgot a few other things. So first he exhorted his Canadian audience to vote in America’s coming elections; then, trying but failing to correct himself, he urged them to donate to Democrat candidates in those elections (https://www.breitbart.com/big-government/2018/09/10/watch-david-hogg-asks-canadians-interfere-us-elections/). Well, even Michael Moore knows that’s illegal. But he couldn’t get through to Hogg and finally had to take the microphone from him.

Gee, that raises another question about those “open borders” that Hogg and Moore and other Democrats say they want to have.

Suppose we erase the border between the USA and Canada. At least we speak the same language (eh?) and have similar popular cultures. So we get rid of the border.

Now, if there’s no border, what’s to stop Americans from voting in Canadian elections, and Canadians from voting in American elections? Nothing, really. The situation quickly becomes absurd. With no borders, what’s the point of continuing to call these places “the United States” or “Canada”? You couldn’t run separate elections.

Goldarn it! Looks like we’ll just to have one government for both countries! And with a fraction of the population that the U.S. has, guess how well that’ll work out for Canada. The complications make your head hurt.

So much nicer to be like David Hogg, and not do any thinking at all.