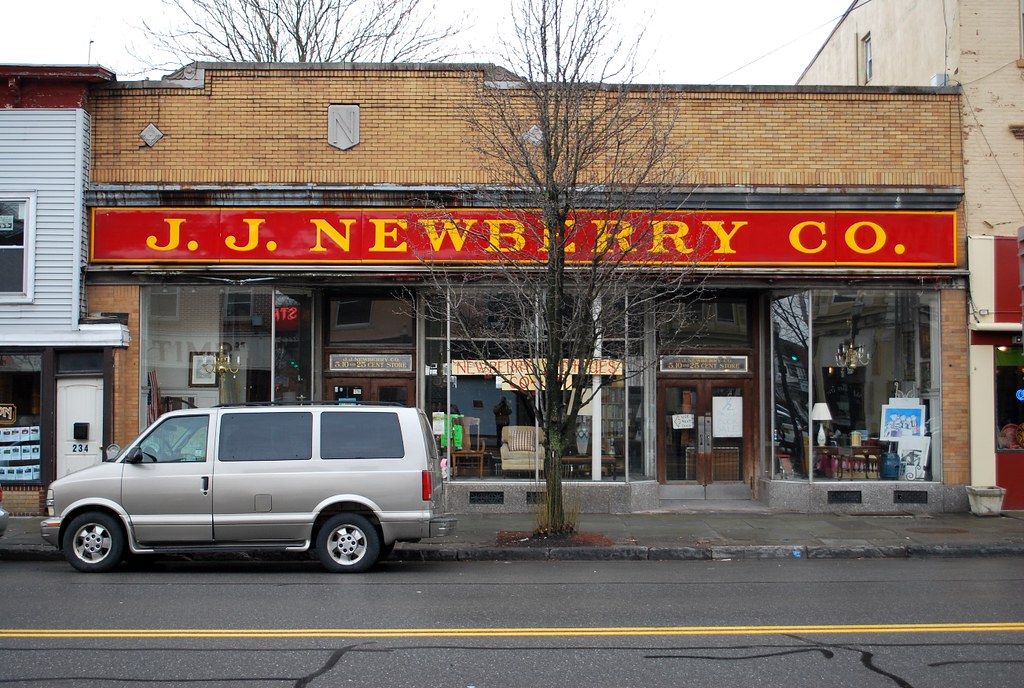 When my mother shopped at Newberry’s in the 1950s, she often treated me to one of those wonderful wax dinosaurs by the Miller Company. A lot of towns had J.J. Newberry department stores.

I haven’t seen one in donkey’s years; and it’s not only Newberry’s that I don’t see around anymore. Several classic department stores have vanished from the landscape.

E.J. Korvette’s–great sporting goods department, I got my Wally Moon baseball glove there. Two Guys from Harrison: their pet department seemed to have trouble keeping the birds in their cages, which always fascinated me. Woolworth’s. Surely you had a Woolworth’s somewhere nearby. And W.T. Grant’s. As a child, these stores looked big to me; but I guess you’d have to call them medium-sized department stores. Or even small department stores.

Where have they gone? Replaced, I suppose, by Target and Wal-Mart. Replaced by the malls: who needs a not-that-big department store, when a mall offers you a whole bunch of specialty stores all under one roof?

Is Bamberger’s still in existence somewhere?

I enjoyed them all. Newberry’s had the best toys, and great Halloween stuff–what you’d expect from a chain that started out as a bunch of five-and-ten-cent stores– Two Guys the best pet department, and Woolworth’s the best candy. They weren’t so big as to be intimidating. You can practically hitch-hike from one department to another at Wal-Mart. Sometimes big is too big. Some of the big stores today seem like they could double as hangars at an airport. I never got that feeling at Newberry’s. But the last Newberry’s store, Wikipedia tells me, closed its doors in 2001.

And oh, for some Howard Johnson’s ice cream!