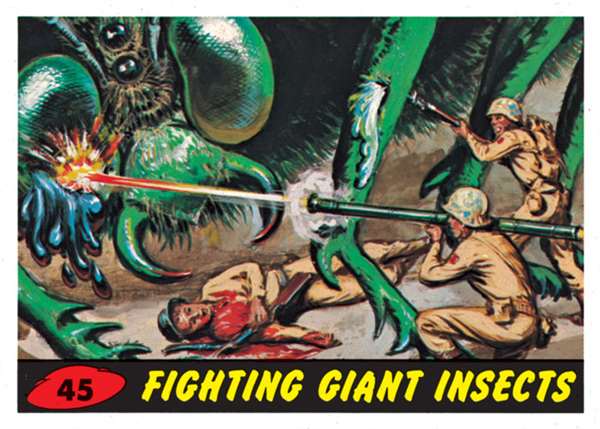 We all have our guilty little secrets, and we have all heard that confession is good for the soul. Today I’ll put that to the test.

There are certain things I absolutely shouldn’t like, there must be something wrong with me, how can I live with the shame of it, etc. “Ah! And what are those things?” I don’t hear you ask. Here I will fess up to three of them, and let the chips fall where they may.

1950s horror movies featuring giant insects and crustaceans continue to delight me. What could be finer, on a summer afternoon, than slipping into the air-conditioned darkness of the old Forum Theater to watch army men vainly try to stave off the attacks of giant bugs? If only we had some of those bugs for the Democrat National Convention…

The Three Stooges: thanks to Youtube, I can get the Three Stooges anytime I want–oh, huzzah! You may wonder why the Three Stooges wrecking someone’s house as they try to install a light bulb is funny, but colleges and Congress wrecking America is not. Thing is, when the Stooges are over, they’re over–and no harm has been done to anything or anyone. We don’t have to live with the consequences of the Three Stooges’ actions. And what a relief that is!

Finally, snow. Everybody else crabs and cranks on those rare occasions when it snows (rare around here, I mean: I don’t live in Buffalo). I love to watch it come down and cover up the mud; and for a little while, the neighborhood is quiet. Snow is the only thing, short of the end of the world, that can take away the constant roar of traffic. Engine noise is 24/7 in these parts; but a respectable snowfall can shut it down for 20 minutes or so. And then there is the evergreen memory of not having to go to school that day because it’s snowed. Yes, I admit it: I’d rather go sledding or ice-skating, or build snowmen or snow forts, than sit in a classroom “learning” something which I’ve totally forgotten by now.

As for the question of how I can live with the shame… well, as best I can, I guess.