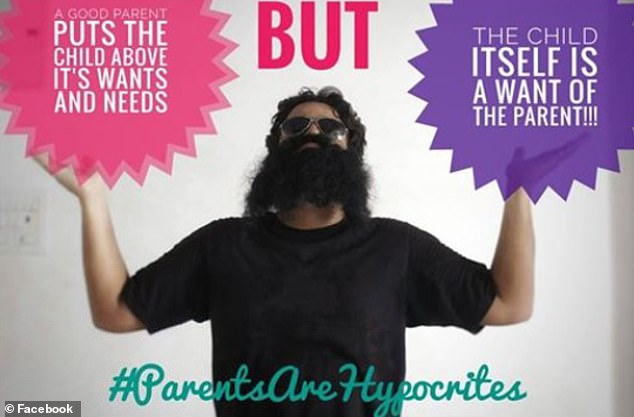 He’s getting his 15 minutes of fame.

Is this comedy or tragedy? Or both?

Saying that having children is morally equivalent to “kidnapping and slavery,” a schnook in India says he’s going to sue his parents for giving birth to him without his consent (https://www.dailymail.co.uk/news/article-6664843/Man-wants-sue-parents-giving-birth-without-consent.html). He has not made it clear how they might have gotten that consent.

He also thinks parents are wrong for “forcing it [the child] to have a career.” Well, heck, all sorts of people all over the world don’t have careers. Nobody’s stopping you, lackwit, from just being a bum.

Supposedly this jidrool is a leader in an “anti-natalist”–oh, boy, another new word!–movement whose aim is to convince people not to bear children. He has a web page called Childfree India. “We are a group of people who have decided not to reproduce,” he declares. “We are Childfree Indians!”

I could understand if it was other people suing this guy’s parents for inflicting him on them. Any number of couples could be sued for giving birth to ninnies. But I think if I were a judge, I would fine him court costs and jail his lawyer for contempt: frivolous lawsuits waste the public’s money.