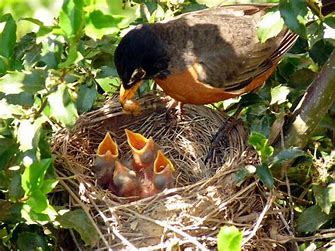 No, I am not going to post a picture of this shameful business. Here’s a robin feeding her chicks. God’s stuff is sane. Much of ours is not.

Choosing up sides, that’s what it comes down to. You’re either on the Lord’s side, or you’re not.

Walmart has chosen “not.” Right in time for Easter, too.

Walmart now has an online video, “Love Is In the Aisle,” featuring a pair of sodomites who are in the store on a “blind date” (https://www.afa.net/activism/action-alerts/2019/walmart-launches-gay-dating-ad/). Suffice it to say that homosexuals are not known for the fine discrimination they practice in choosing partners. But Walmart wants to portray this as wholesome.

Well, Walmart. you chose. It’s not too late to repent, and stop doing this. See if you can choose a little better. Because someday everybody’s going to run out of second chances.

I have lived in Metuchen, NJ, all my life. I have been married to my wife Patricia since 1977. I am a former newspaper editor and reporter. I was also the owner-operator of my own small business for several years. I wrote various novels and short stories published during 1980s and 1990s. I am a long-time student of judo and Japanese swordsmanship (kenjutsu). I also play chess, basketball, and military and sports simulations. END_OF_DOCUMENT_TOKEN_TO_BE_REPLACED
This entry was posted on Wednesday, March 13th, 2019 at 11:00 am and tagged with culture rot, liberals vs. America, presenting homosexuality as normal, Walmart celebrates gay dating, who is on the Lord's side? and posted in news, Pop Culture. You can follow any responses to this entry through the RSS 2.0 feed.
« ‘When to be Scared of Cucumbers’ (2015)
Affirmative Action for the Rich and Famous: College »