Mr. Nature: The Cat that Wasn’t a Cat 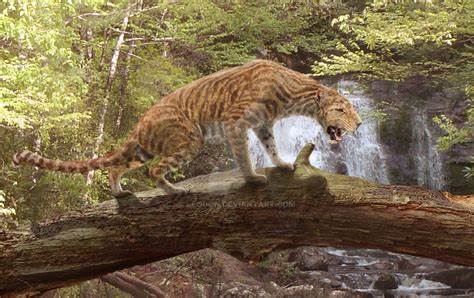 Hi, Mr. Nature here–with Hoplophoneus, a graceful prehistoric predator that looked like a cat, ate like a cat, probably moved like a cat… but according to paleontologists, wasn’t a cat.

I became fascinated by this creature when I was a boy, back when they were still calling it a cat, possibly an ancestor of the famous sabertooth. Details of the skeleton, we are now told, are different enough from a cat’s skeleton as to make it a cat wannabe.

But never mind. It’s still an animal well worth looking at, and I wonder now if it’s going to turn up in Obann. Cross an ocelot with a sabertoothed tiger, and you’d get something very like a Hoplophoneus.

I dream of seeing these animals someday, alive and real, when God restores His creation in all its former glory. But for now, the closest I can come is to put them in my books and let ’em rip.

I have lived in Metuchen, NJ, all my life. I have been married to my wife Patricia since 1977. I am a former newspaper editor and reporter. I was also the owner-operator of my own small business for several years. I wrote various novels and short stories published during 1980s and 1990s. I am a long-time student of judo and Japanese swordsmanship (kenjutsu). I also play chess, basketball, and military and sports simulations. END_OF_DOCUMENT_TOKEN_TO_BE_REPLACED
This entry was posted on Saturday, May 11th, 2019 at 12:15 pm and tagged with bell mountain series by lee duigon, Hoplophoneus, mr. nature, prehistoric mammals, sabertooth cat and posted in nature. You can follow any responses to this entry through the RSS 2.0 feed.
« My Birthday Surprise
Unpredictable Cats (with a couple of dogs thrown in) »

8 responses to “Mr. Nature: The Cat that Wasn’t a Cat”