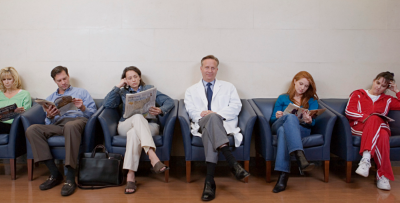 I’ll bet you’d be shocked, if you could add up the hours you’ve spent in various waiting rooms, and could see the total for your life so far.

Waiting rooms used to be bad enough when there were only old magazines and other patients to look at. Now they’ve all got TV. And there’s nothing on.

Another Morning in the Doctor’s Waiting Room

I recall one morning TV talk show, hosted by and featuring celebrities I never heard of, in which the guest simply didn’t turn up and they were stuck with dead air: the host went out to the parking lot to see if the guest was wandering around out there, maybe hoping to find usable cigarette butts. Maybe the guest couldn’t figure out how to use the door.

And the magazines are no better than they were 50 years ago. The ads are more prurient, but the content’s just as dull as ever.

Why does your dentist want you to watch the new Let’s Make a Deal?