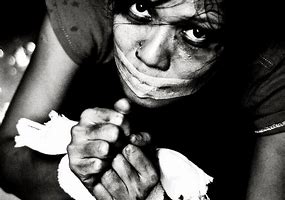 What with one thing or another in the nooze over the past few years, I’ve come to believe that the modern-day slave trade, now called “human trafficking,” is a major and inseparable component of fake utopian globalism.

Those who don’t migrate voluntarily, deserting their Third World hellhole countries to flee to America and Western Europe, are scooped up involuntarily. The ones who are “hired” to toil at lowly jobs for lowly wages, or no wages at all, are still better off than the ones who’ve been chosen to be sex slaves… a la Jeffrey Epstein’s pedophile island.

Globalist fat cats want two things: more and more wealth for themselves, a bigger and bigger chunk of the world’s wealth; and defenseless people for them to lord it over. By keeping certain countries in thrall to corrupt politics, crazy economics, and lawless violence, the globalists maintain a ready reserve of coolie labor. From these wretched countries they lure poor and ignorant people to migrate to America and Europe–where they’ll have jobs, heh-heh, they’ll be able to send money home to their families, not to mention all sorts of free stuff and “a path to citizenship”–

All you gotta do is hop into the back of the truck, right after you pay the nice coyote who owns the truck, and we’ll cart you right across the border. And don’t worry about getting deported–the Democrat Party is working overtime to keep you here.

Because the cheaper the cost of labor–that is, the less they have to pay you for those jobs you’re not allowed to quit, for fear of being kicked out of the country–the more money winds up in their offshore bank accounts! Plus you’ll be performing the highly desirable service of depressing the wages of American and European workers. Why should we pay them all that money, to do jobs that you’ll do for practically nothing?

O Lord our God! Deliver us from evil, and from the servants of the evil one. In Jesus’ name, Amen.

3 comments on “The Flip Side of Globalism: Human Trafficking”