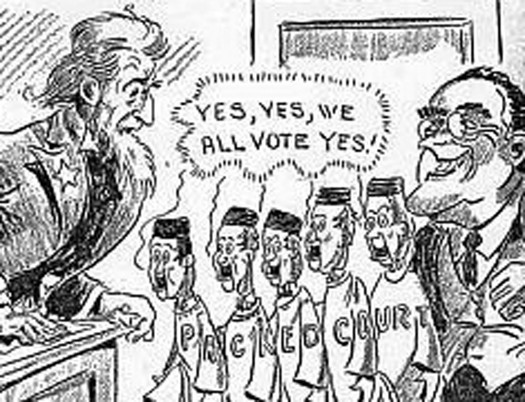 Ooh, ooh–we’ve got a brainstorm! Tell the justices that unless they stop being political and start handing down some rulings that we like, especially when it comes to the Second Amendment… we’ll freakin’ well pack the court! Yessiree, you Supremes better start listening to us politicians–and that’s how we’ll take the politics out of court decisions (https://www.breitbart.com/pre-viral/2019/08/13/democrats-threaten-supreme-court-reject-second-amendment-or-face-court-packing/).

The last time Democrats tried to pack the court was in the 1930s. After a number of key rulings went against him, President Franklin Roosevelt tried to add another half  dozen justices to the court so he could get the kind of decisions he wanted. He gave it up after the Republicans won a decisive victory in the 1938 Congressional elections.

Well, Democrats are liberals and liberals avoid learning any civics. The whole idea of “checks and balances,” “separation of powers,” saturates the Constitution: our founders, by providing for lifetime tenure for the justices, did their level best to render the Supreme Court immune to the political hot potato du jour.

Democrats love it when there’s a bunch of libs on the court and they can get aberrations like abortion and “gay” pseudo-marriage imposed upon the nation. But when the libs are in a minority and you get more conservative decisions, they scream bloody murder.

So the mask is off, and we have five Democrat senators overtly threatening the court with political punishments if the justices won’t do what these politicians want them to do.

If the United States somehow avoids being fundamentally transformed into a banana republic, it won’t be because Democrats didn’t try.