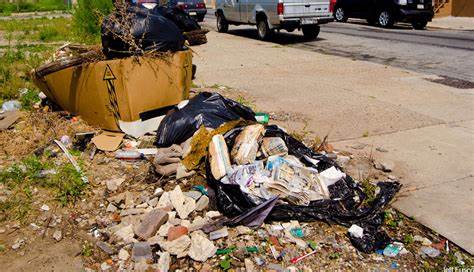 I had a dream which troubled me, the other night. I pay attention to dreams: they might be trying to tell me something.

I dreamed Patty and I, in her car, were returning home across the broadest stretch of the Raritan River, which required us to cross a bridge. It wasn’t any of the bridges that are really there. It looked old, like it might’ve been built in the late 1930s.

There was almost no traffic, and very soon we had to slow down because there was so much litter strewn about: beer bottles, garbage bags burst open to disgorge their contents, damaged cardboard boxes. The lane itself grew narrower. And there were people aimlessly shambling this way and that–drunks and druggies. They didn’t seem to notice us. Or much of anything else, for that matter. Looked sort of like a scene from the Sumerian underworld. We could only pray we wouldn’t run over any broken glass and become a part of that scene ourselves.

We came off the bridge to find the highway in much the same condition, as far as the eye could see. It’s not supposed to be like this. Not like this at all.

Then the cat shoved the bedroom door open and yowled at the top of her lungs.

I think maybe I’ve seen more pictures of San Francisco than is good for me.

4 comments on “Not a Nice Dream”