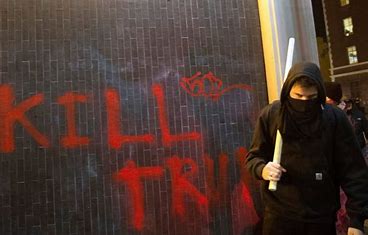 Remember, a few days ago, Facebook censored one of my posts? Yeah–said it contained “abusive content.” Because I called a Democrat politician a doofus. Hate speech.

Well, an English professor at Kirkwood Community College–sheesh, not even a real college–in Iowa was able to post on his Facebook page, without getting censored, without anyone “reporting” him, his “rage” against Evangelical Christians and his desire to kill them and “bury them deep in the ground” (https://ijr.com/antifa-supporting-professor-resigns-kill-evangelicals-post/). No abusive content here.

The college convinced him to resign, I guess because even a college looks bad when it employees overtly homicidal maniacs. The college president said she and all the rest of the academic gang respect his right to say anything he wants to say, yatta-yatta. But I guess convincing students that you’d like to kill them… well, that’s a little thick.

Why does Professor “I am Antifa” want to kill Christians? To “stop” them, he says. Stop them from doing what? He doesn’t say. Whatever leftids don’t want them to do. Because in the minds of liberals, everyone who isn’t them is subhuman, belongs in a gulag, etc.

Defund them now. Save America. Defund the colleges.