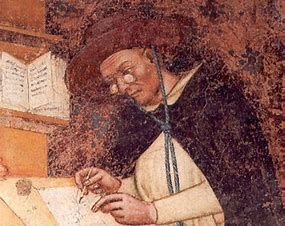 I’ve worn glasses since I was a little boy, and I’d be lost without them. I didn’t know I was near-sighted: I didn’t know I should’ve been able to read the blackboard in school. They thought I was a bit stupid–until I had an eye test. Once I got my first pair of glasses, my grades improved, big-time. I’ll never forget riding home from the optician’s and being able to see everything that I couldn’t see on my way there.

But where did glasses come from? When were they invented? For how long did people like me have to muddle along without them?

Romans used glass globes filled with water to magnify print. The first glass “reading stones” were invented, by somebody, we don’t know who, around the year 1000 (http://www.glasseshistory.com/). In the 13th century, Venetian glass blowers started manufacturing them; and in 1284 the first paired reading stones in frames came into use for monks and craftsmen.

The first recognizable eyeglasses, in frames, appeared in a painting by Tommaso da Modena in 1352, when the artist depicted monks wearing them so they could study manuscripts. From then on, various inventors improved eyeglasses to benefit all kinds of vision problems.

Eyeglasses are one of the all-time great inventions. Imagine how much progress could not have been made without them!

3 comments on “The Invention of… Eyeglasses”