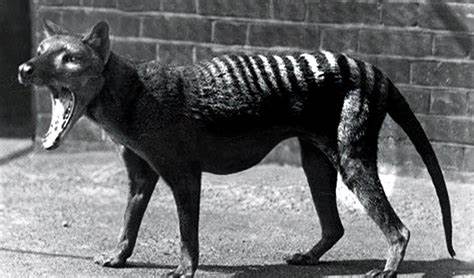 An out-of-place and drastically overgrown thylacine? Naah–couldn’t be!

Things like this just don’t happen today. They are preserved in history.

During 1764 through 1767, a rural region in France was terrorized by a wild animal called “the beast of Gevaudan.” Incredibly, it attacked some 200 people, with 90 fatalities. Survivors described it as an extra-large wolf; but some contemporary illustrators drew it with a long, stiff tail unlike any wolf’s. Besides, wolves hunt in packs; the Beast hunted alone.

The royal government sent special hunters to kill it, there were at one time an estimated 10,000 hunters tracking it–and finally a local man shot it dead.

The rest is very much a mystery.