Violet Crepuscular attempts to brace her readers for what’s going to happen in Chapter CCCXLIV of her epic romance, Oy, Rodney. “Brace yourselves, dear readers!” she writes. And lets it go at that.

Things have been so hectic in Scurveyshire lately that no one has noticed the gang of 75 native workers–natives of what country, we are not told–frantically digging up half the village common. They are directed by Professor Saltinus Facehead, F.A.P. But early this morning, people finally do take notice: the diggers have unearthed a perfectly hideous colossal sculpture. Here is a picture of it. 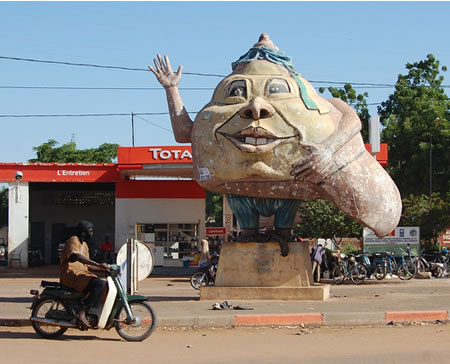 Lord Jeremy Coldsore, Justice of the Peace, and the American adventurer Willis Twombley, weirdo, hasten to the common in response to complaints by everyone in town. They find the professor celebrating with a rather large bottle of The Lying Tart’s cheapest Scurveyshire ale.

“What is the meaning of this?” inquires Lord Jeremy.

“The meaning?” cries the professor. “Why, man, this sculpture is pre-Neolithic–maybe even pre-human! It’s the largest sculpture of its kind in all the world. By Jove! It makes the Americans’ precious Cardiff Giant look like a bauble on a charm bracelet!”

Twombley swiftly draws his six-gun and shoots the hat off the professor’s head. “Watch what you say, ol’ hoss!” he warns. “Us Americans set a lot of store by that there Cardiff Giant. My next shot’ll ventilate you.”

“Have you a permit for this mess?” demands Lord Jeremy.

“My dear boy,” replies Professor Facehead, “I have a personally signed firman from the Sultan of Swat authorizing me to dig anywhere I please, as long as it’s not in his territory. I need hardly point out that the sultan is our own deer queen’s favorite pen pal! So don’t interfere, or you’ll find the Coldstream Guards bashing down your door.”

We are troubled by Ms. Crepuscular’s use of the word “deer” instead of “dear.” She provides no explanation for it. She closes the chapter with news that her nomination for the Pulitzer Prize, entered by her excitable neighbor, Mr. Pitfall, seems to have gone astray. “I should have heard from the committee by now,” she says. “I can’t imagine what could have happened to my nomination.”