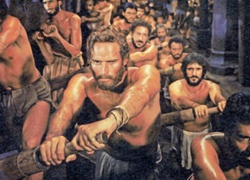 Not quite galley slaves, but getting there

I posted this in 2012, and five years later it sparked a lively discussion.

The Biggest, Baddest Monster of Them All

Of course, this was all before China launched its “social credit” regime, in which the government keeps tabs, 24/7, on each and every citizens. They keep a running score on you which fluctuates up and down, depending on what you say and do; and whether you are allowed to do certain things–like ride a bus, for instance–depends on your current score, as compiled by the government. And it’s all done by robots, so you can’t defend yourself, you can’t appeal–might as well argue with a chair.

Government is able to do things like that because it has too much money.