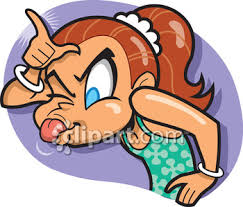 Prayer and Bible-reading having been forbidden many years ago, the last public high school I taught at had closed-circuit TV in every classroom. There was a network that provided “programming” to all participating schools, and it was on during the home room period. Every day.

Here’s the only thing I remember about that programming.

It had commercials. For reasons which will become apparent, I’ve forgotten whatever it was they were trying to sell.

In this commercial, a cartoon “teenager”–baseball cap on backwards, hair over his eyes, sloppy clothes–spent the whole 60 seconds being rude to adults. Slamming the door shut on an old lady just as she was about to go through it. Knocking over a trash can. Somehow this behavior was supposed to sell a product. Somehow it was supposed to be perceived as cool: like kids should emulate this jackass.

In this small way, public schooling contributed to the coarsening of our culture. Oh! I should mention that in the afternoon, the students used those TV sets to watch “The Jerry Springer Show.” That was major-league culture rot. A daily celebration of both ignorance and depravity. They weren’t supposed to watch it, but they did.

I haven’t been back to public school during the 21st century. I shudder to think of what they might be showing on those TV sets now.