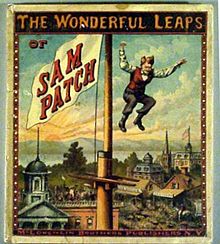 Davy Crockett was our country’s first international celebrity, famous mostly for things he didn’t do; but young Sam Patch, a mill hand from New Jersey, had him beat by over a decade.

Sam became famous by jumping off the Passaic Falls and not getting killed. He soon went on tour, performing death-defying jumps off ships’ masts, buildings, and other waterfalls. It gave rise to a popular slogan: “There’s No Mistake in Sam Patch.” I am unable to explain that slogan.

In 1829 Sam became the first insane human being to jump off the top of Niagara Falls. He survived, but the money he earned was insufficient for his needs… so he did it again. Jumped off Niagara Falls twice.

Later that year, jumping off a cliff into the Genessee River, something went wrong. He hit the water badly with a loud crack and never emerged, his frozen body being found a few days later. It’s possible he suffered a heart attack half the way down, which ruined his entry into the water.

He’s been largely forgotten; but “The Wonderful Leaps of Sam Patch,” illustrated above, was published in 1870.

He would’ve been a mega-celebrity on Youtube, these days.

Why did he do it? Fame and money, perhaps: and jumping off waterfalls had to be more thrilling than working as a mill hand. And after jumping off Niagara Falls twice, maybe he felt there was nothing he couldn’t do.

If you’ve ever been to Niagara Falls and seen it with your own eyes, you’ll find Sam’s feat exceedingly hard to imagine. Maybe even impossible.

To risk one’s life for entertainment seems a deeply pagan thing to do.

2 comments on “An Early American Celebrity: ‘The Jersey Jumper’”