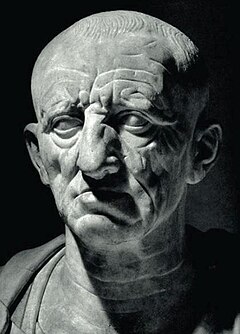 Cato the Elder: not the cheeriest guy in Rome, but one of the wisest

Marcus Porcius Cato, Cato the Elder, was the arch-conservative of Rome’s republic and used his considerable powers to preserve it, very likely gaining for it an extra hundred years. His great-grandson, Cato the Younger, gave his life trying to protect it from Caesar.

Cato the Elder had too much opposition ever to become an idol of the masses; and once upon a time, according to Plutarch, someone asked him why such a famous and important man as Cato didn’t have a statue in the Forum.

Cato’s answer: “I would rather people asked why I didn’t have a statue, than why I did.”

If you haven’t read Plutarch’s Lives, and would like a nice, thick book jam-packed with history, philosophy, and character study that’ll probably carry you through an entire year of fascinating reading–well, what are you waiting for?

6 comments on “Cato the Elder… on Statues”