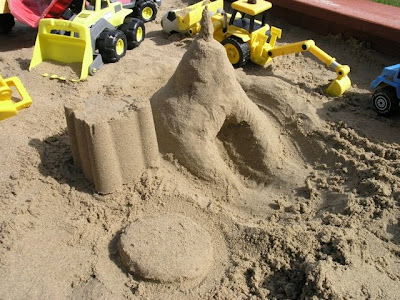 Summer has just ended (*sigh*). Something about the quality of the sunshine on this beautiful September Sunday brought me back to playing in the sandbox. We lived next door to the playground, and it was a big sandbox.

Sure, I played in the sandbox when I was a toddler, but I really got into it when I was older. If the sand was a little bit wet from recent rain, you could really go to town with it. Bring along a bag of toy animals, dinosaurs, cowboys, cavemen, army men (of course!), and build the terrain of their adventures. Forts that had to be taken. Pits to be avoided. Mazes that had to be escaped before the Tyrannosaurus ate you. King Arthur’s castle.

Wow, that was fun! So what if we weren’t toddlers anymore? My friends and I had endless fun, putting our soldiers and knights and horses and elephants through one tight spot after another. True, this kind of play required an imagination; but we all had one, back then. Probably because we weren’t constantly spoon-fed “entertainment” that misguided adults thought we should have.

Occasionally we would lose a caveman in the sandbox. Maybe he got lost in a labyrinthine cavern that we never knew was there. I wonder how those lost cavemen made out…