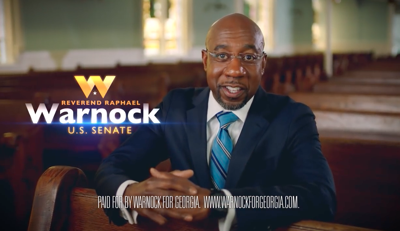 I don’t get it. Why would you want to be a senator of some country you think really stinks of racism and assorted other isms?

Well, one of the Democrats running for senator from Georgia, Rev. Raphael Warnock–who once said you can’t serve God and be in the military–said America must “repent for its worship of whiteness.” Actually he said it in 2016, in a sermon (https://nypost.com/2020/11/16/rev-raphael-warnock-us-must-repent-for-whiteness-worship/).

From what I’ve read of the sermon, the rev and I seem to agree on some of its most salient points. “Of one blood” God made all the peoples of the earth. The Tower of Babel was a symbol of world government by unrighteous human beings. But it’s the rev’s party, not mine, and he, not me, who’s playing racial politics.

He will face Republican Kelly Loeffler in a Jan. 5 runoff, unless she’s withdrawn to some secluded place to repent any worship of whiteness she might have once indulged in.

If “whiteness” is so bad, what about all that “Black” stuff the Left is so high on lately? Oh–that’s good? Well, I admitted I don’t get it.

Democrats think voter fraud has bagged them the presidency. Now they hope it’ll win them the Senate. And then, in Sen. “Che” Schumer’s words, we can “really change America.”

2 comments on “GA Senate Hopeful: US Must Repent ‘Worship of Whiteness’”