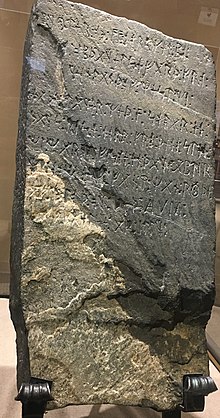 “Unknowable” and I have been discussing the Kensington Stone, which possibly some of you have never heard of. It’s an ongoing historical controversy.

Did an exploring party of 18 Swedes and Norwegians (none of whom were actually vikings) visit Minnesota in 1362, and carve a brief account of their adventure on a stone, in medieval Runic characters?

In 1898 a farmer, Olof Ohman, of Solem Township, Minnesota, while plowing his field one day, found a 200-lb. stone carved with characters he first thought were an “Indian almanac” but later realized were medieval runes of the kind once used in Scandinavia. The language was Swedish, and the text told of an “expedition from Vinland” (now identified as Newfoundland) which ended when ten of the men were killed, probably by natives, and the rest had to abandon any further exploration.

Since its discovery, most scholars–but not all–have branded the Kensington Stone as a hoax. There’s probably no hope of a final resolution of the controversy. “Vikings” in the 14th century still lived in Greenland and Vinland and made a habit of hunting and exploring the various islands in the southern Canadian Arctic. So they might have followed several rivers into the interior of North America and gotten as far as Minnesota.

My own problem with the Kensington Stone is that by 1362 the Roman alphabet, with a few minor modifications, was widely used by Scandinavian and Icelandic writers, with many such manuscripts–Icelandic sagas, lives of saints, etc.–preserved. So why would the explorers have carved old-fashioned runes on the stone instead of ordinary letters? Were the runes still in use, that late in history? But it’s not impossible that some people were still familiar with them.

Scholars continue to debate the authenticity of the stone.

As Thucydides observed, some 24-hundred years ago, the rock-bottom hard part of history is finding out what really happened.

3 comments on “Did Vikings Reach Minnesota in the 14th Century?”