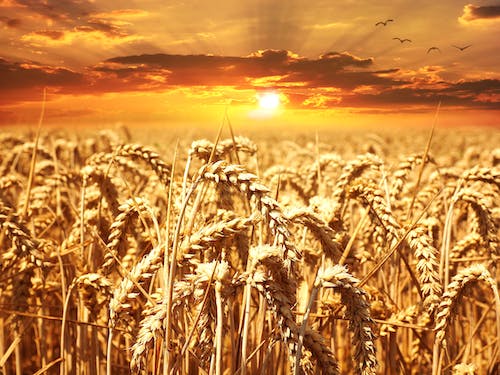 Toldja I shrank from reproducing any of this stuff. Here’s a nice field of wheat instead.

Stay with me, I’m going to make a prediction. But first this–

I stumbled over a thing this morning, a cartoon which I won’t post here because I don’t want to incur a spiritual pollution. It featured a denunciation of a married woman and her supposed “depraved breeding kink.”

Actually, it’s scattered all around the Internet–frequently in conjunction with a lot of dirty stuff. Sorry, no links. Not on a Christian blog.

Now for the prediction.

In the near future, probably sooner than I expect, a new movement of bizarre stupidity will arise–in which a man and a woman getting married and having children will be denounced as wicked, irresponsible, dangerous, selfish, yatta-yatta. It will emerge through our colleges and universities–okay, I didn’t need a crystal ball for that–race through our public schools like a wildfire, and be on every celebrity’s lips before you can sit down to your corn flakes in the morning.

I won’t go so far as to predict the Democrat Party will quickly seize the leadership of this movement: it might be too abominable even for them. Suffice it to say it wouldn’t much surprise me if they did. Never, never underestimate the Democrats’ attraction to evil.

Well, at least I won’t be disappointed if I turn out to be wrong.

4 comments on “‘Your Depraved Breeding Kink’? What?”