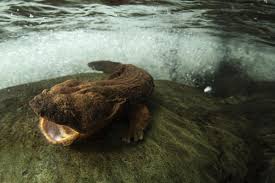 The computer will not let me post any image that has anything at all to do with the subject matter. So here’s an angry salamander. I’m allowed to post that.

My brother and I once made a conspiracy to give each other Genuine Oriental Malay throwing knives, available at our downtown hobby shop, as Christmas presents. Yes, it left something very much to be desired, as a way of commemorating Christmas. Fishing pole, yeah, okay. A knife for you to throw at somebody–no, not okay. But I often look back at my youth and wonder, “What was I thinking?”

Our Genuine Oriental Malay (are there any Occidental Malays?) throwing knives were made out of some cheap metal that would have prevented the growth of civilization, had it come along earlier. When you threw them at a target, say a tree-trunk, they struck with a “Blap!” sound–and never, never, never hit point-first! They were great for judo practice, though, because they couldn’t cut anything. Any formless piece of cheap metal could do what they did… which was basically nothing.

I have discovered that “Oriental Malay” (must be a brand name) throwing knives are still available online. Supposedly these are made of steel instead of dried-out rubber. But I have no plans of giving them as Christmas presents.

2 comments on “A Christmas Conspiracy”