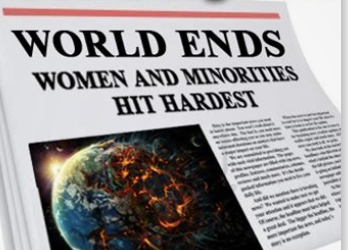 It used to be a joke. Now it’s a reality.

It seems to have been the inspiration for the creation of a brand-new government bureaucracy, another bottomless pit into which to fling tax dollars: [raspberry fanfare] The Office of Environmental Justice! Hot dog. Part of Health & Human Services. Part of an executive order by senile SloJo himself. (*Note: This not to be confused with the Disinformation Governance Board. One is nonsense and the other is bilge.)

Best of all, informed by a 2007 study on “environmental racism” (what?) commissioned by none other than that high temple of Far Left crazyness, the UCC, United Church of Christ. Pioneers of gay-womanist-Bible-aint-God’s-word theology.

Oh! And that guy who calls himself “Rachel,” the fat guy with the wig and nail polish–he’s gonna be involved in this, too. Maybe as the mascot.

Yes! Climbit Chains disproportionately drops its load on “the poor,” and “marginalized” (by whom?), and–of course–People Of Color (POCs)! The bigwigs at the new bureaucracy have already hailed Ol’ SloJo as the perpetrator of “the most ambitious Environmental Justice agenda in history.” Well, yeah, it sure does put Julius Caesar’s environmental justice agenda in the shade.

Have we left out any left-wing blather? Any Far Left cliches this story doesn’t touch on? I think this story might be in line for an award. Most Thorough-going Piece of Shagwah Ever. Or at least for 2022.