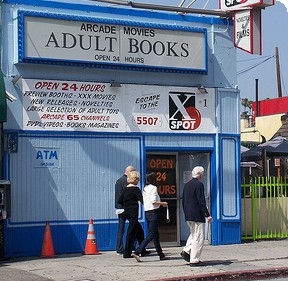 What would you expect if you enrolled your child in something called the Gaia Democratic School?

Well, the few Minneapolis parents who did that recently found out: the director of this newly-created private school–would you believe the name Starri Hedges?–took the kiddies on a field trip to the Smitten Kitten, an adult book store ( http://www.startribune.com/school-s-sex-store-field-trip-brings-calls-for-new-leader/306215651/ ).

Parents are now kind of cheesed off that their children were exposed to serious pornography, and are demanding the director’s resignation.

But what did they expect?

Well-to-do liberals are way behind Christians and conservatives when it comes to setting up private schools. Why bother? The far-left teacher unions control America’s public schools. They might as well be “progressive” private schools, only with much lousier food served in the cafeteria.

Some of these parents wish to protect their children from evangelization for precocious sexuality by putting them in public school. Dream on.

What–you don’t believe it? Because if you believed it, you’d have a hard time justifying your decision to keep your kids in public school.

Here is a 2010 news report of a New Jersey sex educators’ conference… http://www.chalcedon.edu/research/articles/when-sex-education-turns-into-pornography . Read it.

I very much doubt it’s gotten any better in five years–only now they may be moving on from leading children into homosexuality, in favor of “transgender” perversion.

I know, I know–“Well, that certainly doesn’t happen at our school!”

But if it hasn’t happened in your town yet, don’t worry–it will. It will.