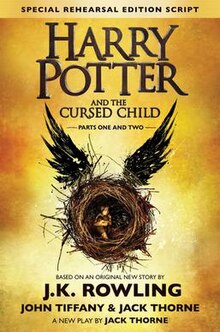 How many people have bought this, thinking it was a new Harry Potter novel written by J.K. Rowling?

Well, never mind her name on the cover–the fine print says “based on an original new story by.” Based on.

So it wasn’t written by Rowling, and it’s not a novel, but a script for a play.

If you open the book, you can immediately see the difference between a novel and a script for a play: the play has much, much more white space showing, way fewer words on a page than the novel. Sof when you buy this, you are paying for a fair amount of paper with nothing printed on it.

Scholastic Books–not my favorite outfit–hoped to make huge amounts of money on this caper, and apparently they have. If you feel exploited and ripped-off after you pay for the book, it still counts as a sale and Scholastic has still got your money.

Is it these readers’ own fault for not examining the cover more attentively? I suppose you could say it is.

But it’s not nice to take advantage of people.