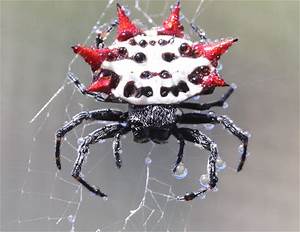 Hi, Mr. Nature here, introducing the spiny orb-weaver spider. They come in all sorts of bright colors, there are many, many different species of them, they’re found in warm climates all over the world–and the very biggest of them are about the size of a quarter, although most are much smaller than that.

They like to stretch out their webs in gardens, where they eat a lot of bugs that would otherwise eat your plants. They’re related to the big, bright Araneus spiders that we have here in New Jersey. All these spiders build big, showy webs, especially impressive when beaded with the morning dew.

Mrs. Nature and I once had an Araneus spider that decided to go on vacation with us, down to the shore, hitching a ride on my car. Every night she built a new web, anchored on the door and side-view mirror. When a fly or a mosquito flew into it, she pounced. When I had to open the car door she got quite upset. So I tried to avoid opening it at night, but we could hardly abbreviate our vacation on account of a spider.

Even so, it was our turn to be upset when, on the next-to-last evening of the vacation, our spider got blown out of her side-view mirror nest, never to be seen again. We were looking forward to her coming back home with us–which, after all, was where she came from in the first place.

God’s handiwork: you can even get to enjoy spiders, if you let your mind open up a little.

4 comments on “A Pretty Spider”