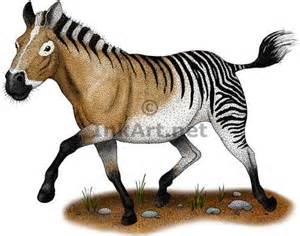 Hi, Mr. Nature here, with a prehistoric critter that I never heard of until this day–when I saw its picture on the side of a U-Haul truck. It’s amazing, what you can learn from unexpected sources.

Hagerman’s horse, aka the American zebra, was discovered in Idaho almost a hundred years ago and is Idaho’s state fossil. (Our New Jersey state fossil is Hadrosaurus, whose remains first taught us that some dinosaurs were bipeds.) It belongs to the genus Equus, which includes all modern horses, and its skeleton most closely resembles that of a zebra–hence the nickname.

How do we know it had stripes like a zebra? Simple–we don’t! All we have is bones, so the picture (above) is just a good guess. Won’t we look like dopes if it turns out Hagerman’s horse had purple polka dots?

I like to think of zebras roaming wild on America’s plains, and it would delight me to see one. But the American zebra is extinct–and it can’t be due to Climbit Change because nobody had refrigerators, air conditioners, or toilet paper back then.

But don’t be surprised if God brings it back when He restores His whole creation.

4 comments on “The American Zebra”