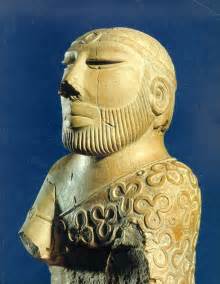 But according to a whole new way of studying ancient history, we can now know all those things and more.

“All I has to do is just look at it, and then I know all about it,” says Dr. I. B. Loony, a professor of Social Gender and Environmental Global Justice at 57 States University. “For instance, that statue, the one that comes from the India Valley. That guy’s name was Harold Patel or something like that, and he was originally assigned the female gender, but like you see by the statue, he self-identified as male and his transition was totally successful! And the reason there is no more India Valley Civilization is because they stopped doing gender fluidity and that caused climate change and that was the end of them. A civilization that doesn’t got no gender fluidity is doomded to climate change!”

Because the language spoken by the Indus Valley people is unknown, and their writing system undeciphered, Professor Loony was asked how he knows these things.

“You are a racist!” he explained. “Biggit, biggit, biggit! Waaaaaah!” He then rolled about on the floor and made peculiar sounds, while pounding with his fists and feet and head.

“No one is allowed to question him,” said one of his students. “He just knows things, that’s all. We take his word for it. I asked him a question once, and I was in Diversity Training for two weeks after that, learning how to think like everybody else. And now you’d better leave before I call the Diversity Response Team and report you for a micro-aggression and violation of our safe space.”

NEXT: Professor Loony reveals the secrets of Egyptian pyramid construction.

12 comments on “Solving the Riddles of Ancient History: A Whole New Approach”