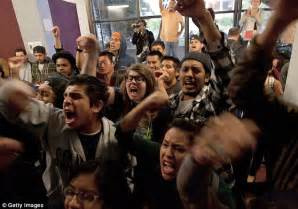 Remember those lovely riots two summers ago, in Ferguson, Missouri, and, shortly afterward, the violent “protests” at the University of Missouri campus? Professors getting busted for inciting violence, all sorts of largely imaginary “racial incidents”? Remember how it was suddenly open season on white students?

Well surprise, surprise! Freshman enrollment at UMo is down 35% since then; and, what’s more, university honchos admit that the “protests” and the anti-white environment are the cause of it (http://www.breitbart.com/tech/2017/07/10/report-students-shun-university-of-missouri-two-years-after-protests-enrollment-down-35/).

Really, if you’re white and you want to enroll at one of those “down with Whitey!” universities, you either haven’t been paying any attention at all, or you need your head examined. Or maybe you just really like groveling and being abused.

I’ve said it before and I’ll say it again: we have too many people being mis-educated in our colleges, and way too many nudnicks being paid good money for mis-educating them. Years down the road, what are we supposed to do with thousands of angry, ignorant, pampered, incompetent young people with “degrees” in Social Justice or Gender Studies?

Our university system, as presently–shall I say “waged,” as in “waging war”?–is a threat to our prosperity, our national stability, and our whole way of life. It needs to be cut back with a scythe.

It’s good news that a lot of students are choosing not to go to UMo.

It would be better news if 90% of our high school graduates chose not to go to any university.

7 comments on “University of Missouri: Party’s Over”