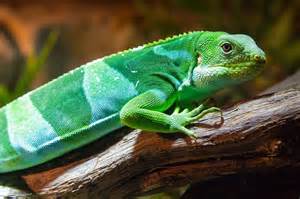 Hi, Mr. Nature here, with a mysterious animal–the two iguana species of the Fiji Islands. The one in the picture is a male banded iguana.

What’s so mysterious about them? Well, members of the iguana family are almost exclusively New World lizards–so what are they doing in Fiji, thousands of miles away from the iguana homeland? On islands, no less, with the Pacific Ocean in the way? They’re really quite similar to American iguanas in most respects. But it would be hard for them to wind up much farther away from where you’d think they belong.

How did they get there? It’s not like they could build miniature Kon-Tiki rafts. Anyway, no one knows. They’re just there.

The Fiji iguanas are rare and endangered, as island species often are. The government of Fiji endeavors to protect them, but that doesn’t stop some people from acquiring them illegally. So don’t buy one! They’re all needed to keep on mating in the wild.

It’s a beautiful creature, though–the Bible says the Lord delights in His creation, and we believe it.