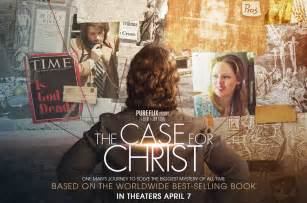 This is the story of an atheist’s journey to Christianity, much of it done while he was kicking and screaming. The Case for Christ is a 1994 autobiography by Lee Strobel–an award-winning Chicago Tribune crime reporter and, for much of his life, a real two-fisted atheist.

By the way, here’s that review I did of his 2004 book, The Case for a Creator (https://chalcedon.edu/resources/articles/case-for-a-creator-author-makes-prediction-belief-in-god-will-prevail-over-darwinism). I think the reason we hit it off so well was that we both needed Jesus Christ to change us, and He did.

But the Lee Strobel featured in Jon Gunn’s movie is not a very nice man. Most atheists aren’t. He’s cocky, close-minded, and fanatical–the very things he accuses “religious people” of being.

It all starts with the Strobels’ little girl choking on a gumball at a restaurant, and her life being saved by a Christian nurse who happened, not according to her original plans for the evening, to be there at that moment. This leads Strobel’s wife, Leslie, back to the Christian faith in which she was raised.

Her husband hates this. “You’re cheating on me–with Jesus!” he shouts at her. “I want my wife back!” Yes, he’s really steamed. And of course he dismisses her religious faith as “just feelings,” which don’t count, while pretending he has no emotional investment in his atheism. Most atheists seem to be angry all the time. They hate Christians for “meddling” with people’s lives–but who’s out there filing all the lawsuits? Who visits hymn sites on youtube and peppers them with f-bombs?

Anyway, Strobel brings his reporter’s skills to bear in an effort to “disprove” Christianity. As this project proceeds, all the “evidence” he gathers seems to point in exactly the opposite direction. He is forced to grant that there were eyewitnesses to the Risen Christ; that there is more, much more, and better, much better, manuscript evidence for the New Testament than for any other ancient document; that the gospel contains touches of authenticity–women discovering the empty tomb, for instance–that would never have been invented by 1st-century writers; that, medically speaking, Jesus most certainly did die on the cross, no hoax was possible… and so on. Every page he turns leads him not away from Christ, but toward Him.

The Bible tells us that the wife may save her unbelieving husband by her own faith in Christ, or the husband his wife; and this is what eventually happens with the Strobels, however hard the husband fights against it. Love is hard to beat.

At last Strobel prays: “All right, God–you win.” And he doesn’t know what happens next, but he wants it.

I must call attention to a side-plot that I liked very much indeed. Watch what happens when Strobel applies all his reporter’s skills, follows the facts rigorously, as he sees them (“I believe in what I see!”), and based on what he’s seen, and based on his most careful reasoning–well, just watch! This is solid gold.

We rented The Case for Christ from amazon.com and watched it on our computer. And I’m here to tell you it was well worth waiting for.

2 comments on “‘The Case for Christ’”