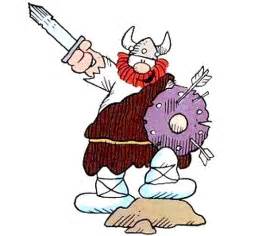 So they found some silken goods in Viking Age burials (9th-10th centuries) in Sweden, and some of these pieces had the name “Allah” woven into them in Arabic writing–so that must mean the Vikings were, well… Muslims (http://metro.co.uk/2017/10/12/were-vikings-muslim-new-research-finds-allah-woven-into-burial-clothes-6995713/). At least, so says a scholar who may have watched The Thirteenth Warrior a few more times than is good for her.

And just to state my bona fides, my specialty in college was the history of the Viking Age. So I know hooey when I see it, and this is hooey. It’s just part of academic leftids’ infatuation with Islam. I knew my education would come in handy someday, if I only waited long enough.

Some of the clothes also have little swastikas woven into them. If we keep looking into ancient Swedish graves, will we find Martin Bormann?

If ever any people left behind an abundant and reliable written record, it was the Scandinavians of the Viking Age. I mean, they wrote down everything! And somehow not a single mention of any “Muslim vikings” appears in any of the sagas, poems, histories, Eddas, or in the copious writings of the great 13th-century Icelandic historian, Snorri Sturlusson. That this curious cultural phenomenon should have eluded Snorri is a preposterous idea.

But when it comes to academics swooning over Islam, it’s “Preposterous ‘R’ Us.” This scholar, for example, speculates on the Scandinavian peoples of the Viking Age picking up “Islamic ideas such as eternal life in paradise after death.” Apparently this ignoramus never heard of Valhalla, never read Beowulf, and has picked up a very bad habit, so prevalent among self-anointed scholars nowadays, of talking through her hat.

The fact is, because the Vikings themselves sailed over as much of the world as they could, stuff from every place you could think of wound up in their possession–by looting, trading, or buying. Silk from the East was a luxury item that always sold well in the West. A silken blouse woven in Persia would have made a nice anniversary present for Helga in Uppsala.

But by now I have probably told you more than you wanted to know.

6 comments on “Scholar (LOL) Thinks Vikings May Have Been Muslims”