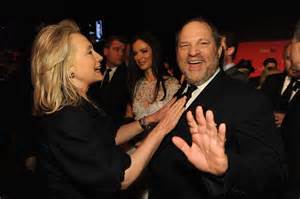 For this year’s Oscar for Hypocrisy, I nominate this incredible statement by Hillary Clinton, uttered five days after Hollywood producer and Democrat mega-donor Harvey Weinstein was accused of a laundry list of sexual predations:

It leaves one breathless.

As First Lady to America’s most notorious sexual predator president, Hillary not only tolerated Bill Clinton’s behavior toward women, but enabled it, defended it, and did everything she could to smear and discredit all those “women coming forward” about her husband. She was, after all, captain of the Clinton White House’s elite Bimbo Eruption Team.

We are asked to believe that no one in Hollywood or in the Democrat Party knew about Weinstein’s, uh, hobby–is that the right word? They really didn’t know? That’s what they want us to believe?

4 comments on “Hypocrisy on Steroids”