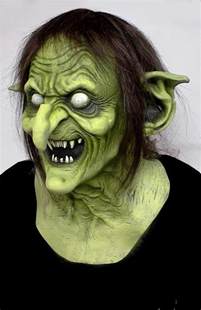 This mini-story occurred to me this morning. It is pure fiction intended to give you a harmless little shudder.

Halloween at Bill Nye Public School. At lunchtime the children are allowed to change into costumes. They can even do it at home, if they can get back in time.

Shortly before the bell rings to end the lunch period, a figure in a horrible scary witch costume appears on the playground: ratty old black dress, coarse red hair flying every which way, unwholesome yellow-green complexion, with a long hooked nose and evilly twisted mouth decorated with two or three brown stumps of teeth. The eyes hardly bear description. So frightful was this costume that some of the younger children break into tears and run away. The older kids just stare.

Then the bell rings, and fifth-graders file into Mrs. Cafone’s classroom. The horrible witch goes in with them. Everyone wonders who it could possibly be. But so far the witch has spoken not a word.

When the children are all seated, Mrs. Cafone can’t help but marvel at the really quite awful witch costume. “Come on, now,” she says, “who is it?” The witch answers not a word. “I know you don’t want your voice to give you away, but you are sitting in Harold Winkie’s seat, so you must be Harold Winkie. Take off the mask so we can see you. Really, that costume is the limit!”

There is a pause. The children are now increasingly mad at Harold–ordinarily the bottom kid on the totem pole, the butt of every joke–for giving them a scare, and they begin to chant in unison, “Take it off! Take it off!” Pounding their desks for emphasis.

He or she reaches up and slowly removes the mask.

And what is underneath is so much worse.

8 comments on “A Halloween Story”