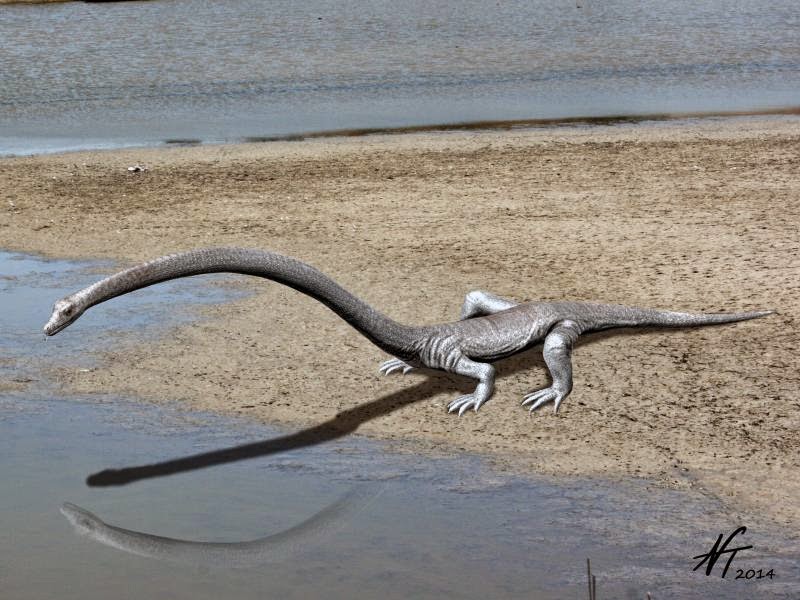 Hi, Mr. Nature here, with that Tanystropheus I would’ve shown you yesterday if I’d only remembered to do it.

This was one of the most unusual creatures ever to walk the earth. Supposedly it lived in the Triassic Period–which was less a real thing than it is merely a way for geologists to talk about earth history. Anyway, there are no more Tanystropheuses.

Marvin (I thought it needed a shorter name) was about 20 feet long, and 10 feet of that was just his neck. Marve is often depicted with this snaky neck that can practically tie itself into a sheepshank, but that would have been impossible: there were only 12 or 13 bones in that long neck, severely limiting its flexibility. A giraffe has only seven neck-bones, and you see what they have to go through if they want a drink of water. Marvin’s neck would have been almost as stiff as a giraffe’s.

He’s also depicted, often, as living mostly in the water–probably because scientists just don’t know what to do with him on land. We have no evidence for this. Some of the fossils suggest a lot of muscle in the pelvic area, which would have counterbalanced the weight of the neck. But how this animal actually lived is a mystery to everybody. Don’t be too hard on paleontologists for not having figured it out. There are lots of things in the fossil record that no one will ever figure out.

What did God do with these strange and spectacular animals He created–the ones that aren’t here anymore? Well, frankly, we don’t know: He hasn’t made it known to us.

Maybe someday He will.

4 comments on “The Tanystropheus–at Last!”