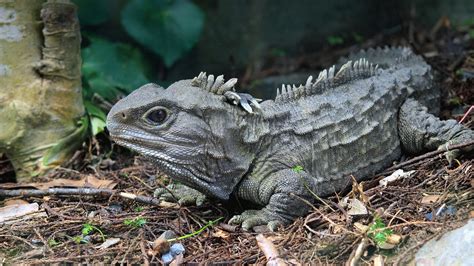 Only in New Zealand–the tuatara

I’ve seen a lot of monster movies about “lost continents,” and was surprised to learn there really is–or rather, was–such a continent. It’s called Zealandia, and scientists believe most of it sank into the sea some 23 million years ago. ( https://en.wikipedia.org/wiki/Zealandia)  This year they declared Zealandia a real continent in its own right, although nothing of it is left above sea level except for New Zealand and a few smaller islands.

We don’t know a lot about what kind of place this was; it’s hard to find fossils that are hidden deep underwater. But what little evidence we have indicates it did have animals other than bats. Let me see if I can find you a picture of one.

We must not forget the strange animals encountered (and mostly wiped out) by Polynesians when they discovered New Zealand: many species of huge flightless birds called moas, and of course the living fossil, the tuatara, that’s still around, strictly protected. It looks like a lizard but it’s not. It’s the sole survivor of an ancient group called rhynchocepalians, or sphenodonts, contemporary with the dinosaurs.

Cool stuff, and food for thought…

7 comments on “A Real ‘Lost Continent’”